This article has been originally posted on Swiftype Engineering blog.

From modern load balancer appliances that allow for TCL based rule sets; local or remotely hosted varnish VCL rules; or in the power and flexibility that Nginx and OpenResty make available through LUA, edge routing rulesets have become a vital part of application serving controls.

Over the past decade or so, it has become possible to incorporate more and more logic into edge web server infrastructures. Almost every modern web server has support for scripting, enabling developers to make their edge servers smarter than ever before. Unfortunately, the application logic configured within web servers is often much harder to test than that hosted directly in application code, and thus too often software teams resort to manual testing, or worse, customers as testers, by shipping their changes to production without edge routing testing having been performed.

In this post, I would like to explain the approach Swiftype has taken to ensure that our test suites account for our use of complex edge web server logic
to manage our production traffic flow, and thus that we can confidently deploy changes to our application infrastructure with little or no risk.

Before I go into details of our edge web server configuration testing, it may be helpful to share an overview of the infrastructure behind our web services and applications.

Swiftype has evolved from a relatively simple Rails monolith and is still largely powered by a set of Ruby applications served by Unicorn application servers. To balance traffic between the multitude of application instances, we use Haproxy (mainly for its observability features and the fair load balancing implementation). Finally, there is an OpenResty (nginx+lua) layer at the edge of our infrastructure that is responsible for many key functions: SSL termination and enforcement, rate limiting, as well as providing flexible traffic management and routing functionality (written in Lua) customized specifically for the Swiftype API.

Here is a simple diagram of our web application infrastructure: 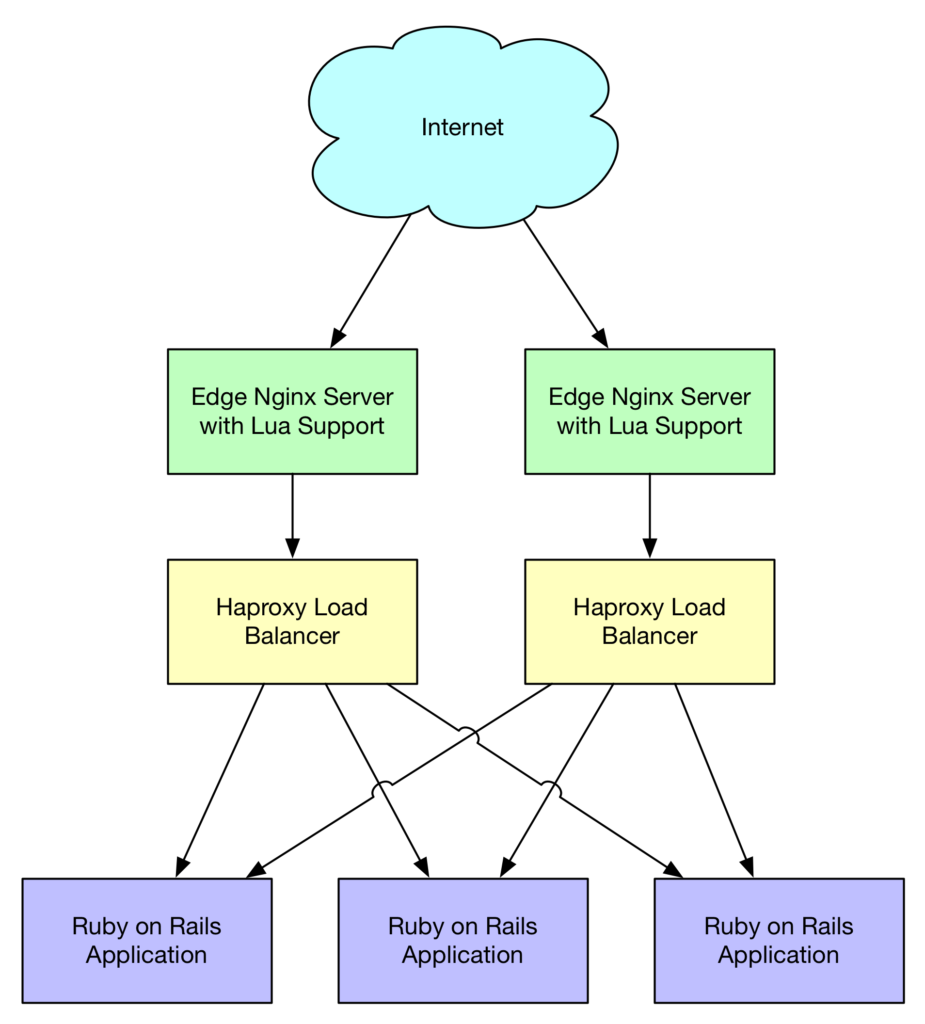 Swiftype’s edge web server configuration contains thousands of lines of code: from Nginx configs to custom templates rendered during deployment, to complex Lua logic used to manage production API traffic.Any mistake in this configuration, if not caught in testing, could lead to an outage at our edge, and considering that 100% of our API traffic is served through this layer, any outage at the edge is likely to be very impactful to our customers and our business. This is why we have invested time and resources to build a system that allows us to test our edge configuration changes in development and on CI before they are deployed to production systems.

When we are confident enough in our unit-tested set of changes, we could run the same set of tests in an “acceptance testing” mode when the mock server used in isolated tests is replaced with an Haproxy load balancer with access to production networks. Working on tests and running them in this mode allows us to ensure with the highest degree of certainty that our changes will work in a real production environment since we exercise our whole stack while running the test suite.

Our testing environment employs Docker containers to serve in place of our production web servers. The test environment is comprised of the following components:

Here is how a test for a hypothetical service foo.swiftype.com (registered in DNS as 1.2.3.4) is performed in an isolated environment:

Here is a diagram illustrating a test running in an isolated environment: 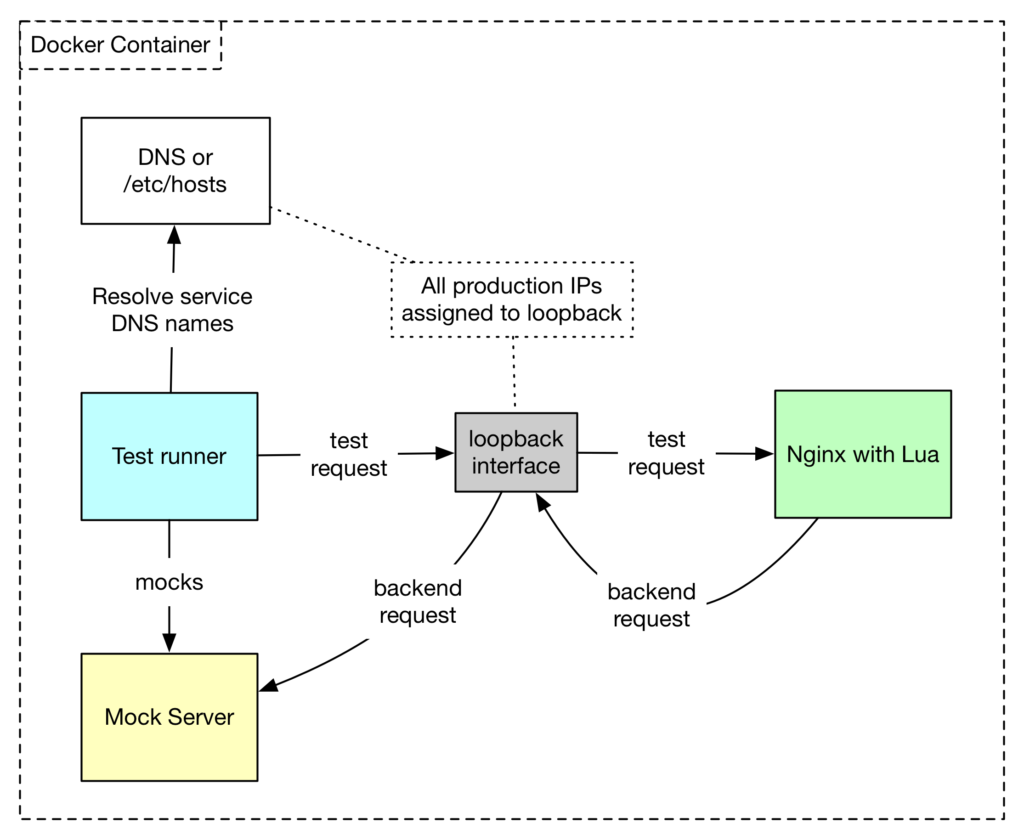 Here is what happens during an acceptance test for the same hypothetical service foo.swiftype.com (registered in DNS as 1.2.3.4):

Here is a diagram illustrating a test call made in an acceptance testing environment: 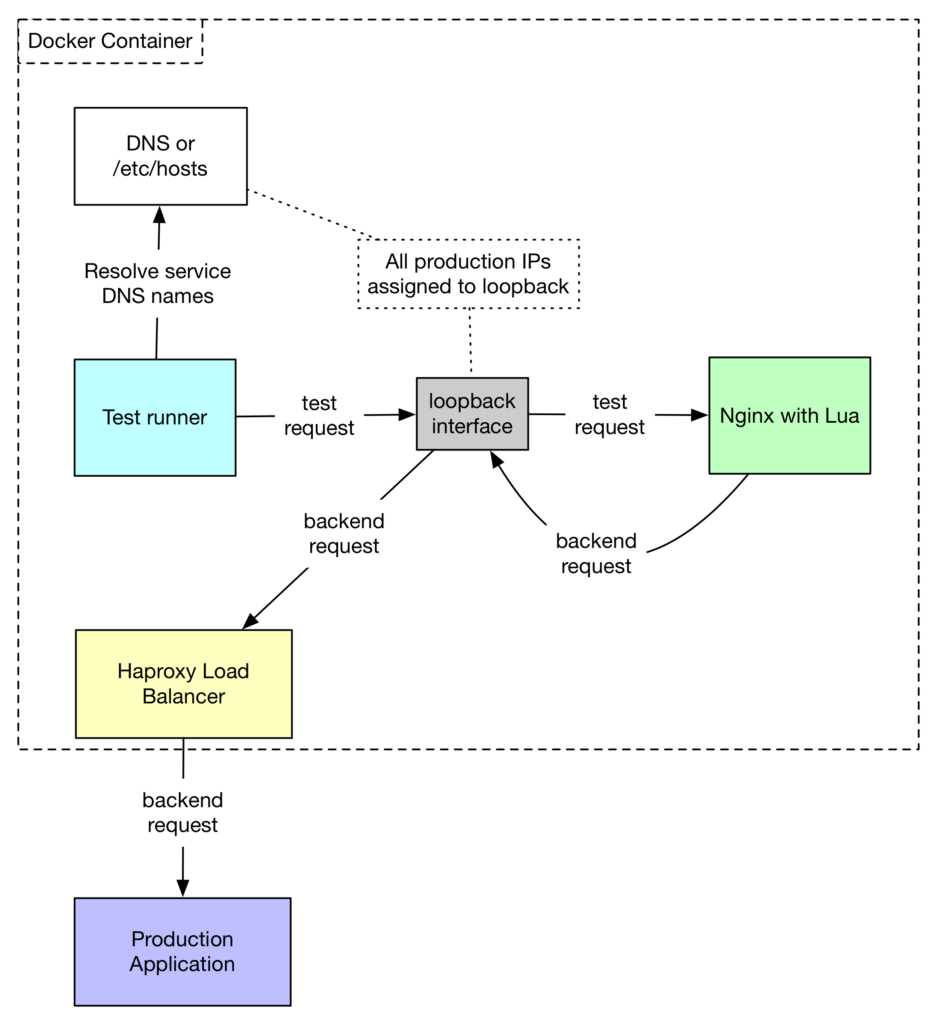 A test call within the acceptance testing environment

Using our edge web server testing framework for the past few years, we have been able to perform hundreds of high-risk changes in our production edge infrastructure without any significant incidents being caused by the deploying of an untested configuration update. Our testing framework provides us the assurances we need, such that we can make very dramatic changes to our web application edge routing (services that affect every production request) and that we can be confident in our ability to introduce these changes safely.

We highly recommend that every engineering team tasked with building or operating complex edge server configurations adopt some level of testing that allows the team to iterate faster without fear of compromising these critical components.